/ Company / Management Board and Supervisory Board / Karolina Szuba 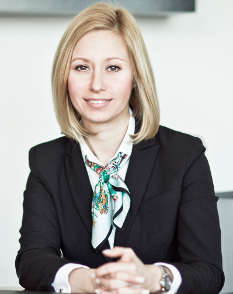 In 2011, Mrs. Karolina Szuba joined Foreign Trade Baltona S.A. as Regional Manager to subsequently take the position of Operations Manager. From 1 January 2014, she is Operations Director responsible for the operational management of the shops in Europe.
In 2009-2011, she was a manager at Sephora Poland Sp. z o.o., and earlier, 2008-2009, she was a sale manager in Royal Collection.

Mrs. Karolina Szuba graduated and received a master’s degree at the University of Insurance and Banking in Warsaw (now the Academy of Finance and Business Vistula). In 2004, she graduated from postgraduate studies with doctoral seminars in the field of Methodology of Economic Sciences conducted by the Institute of Finance at the College of Insurance and Banking
in Warsaw. Then in 2011, she received a Master of Business Administration (MBA) degree in the Polish Academy of Sciences.